One hundred little islands and rocks scattered like pieces of a broken jigsaw puzzle in the centre of Barkley Sound. Open-ocean waves, swaying kelp forests, and a maze of quiet lagoons. Curious seals and shy minks. The piercing shrill of the bald eagle and the haunting call of the loon. Ancient trees, archeological sites, and colourful tidepools to explore. “Totally” is our guide’s favourite word, and we totally agree: the Broken Group Islands four-day kayak tour is a totally awesome, completely classic west coast experience.

Kayaks are cosier than canoes. A kayak’s “large” dry bag holds 30 litres, one-quarter the volume of our canoe’s capacious bags. Clever packing and contortions are required to squeeze our gear and our bodies into the sleek tandem kayak, but we don’t have to do it on our own. Our guide Ben is there to help, along with his two shadows, guides-in-training Shannon and Kevin.

On day one, water taxi Ms. Judy transports us to Dodd Island, where we launch our kayaks for our trip through the Broken Group Islands (map), one of the three sections that make up Pacific Rim National Park Reserve (the Long Beach Unit and the West Coast Trail are the other two sections). These islands are a world-class paddling destination, but in late May the summer crowds have not yet arrived. There is plenty of space for our group of three guides and four guests: Rod from Texas, Sven from Germany, and us.

Clarke Island might be the prettiest of the seven campsites in the Broken Group. Whether you pitch your tent on the beach or in the woods, you will enjoy a layered view of white sandy shoreline, windswept rocks, and distant mountains.

After setting up our tents, we paddle to Turret Island to see an ancient tree and then to Benson Island, which the Tseshaht First Nation recognize as the creation site, where the first man and first woman of the Tseshaht people came into this world. Grilled salmon, a beach fire, and a pretty sunset await us on our return to Camp Clarke.

Coaster Channel is covered with dense fog on the morning of day two, but Ben’s compass work gets us safely across to Wouver and Howell, then onward to our lunch stop, a protected cove on Dicebox Island. Sea stacks, caves, and forested islands appear as the fog lifts. 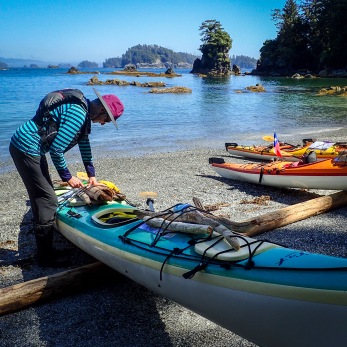 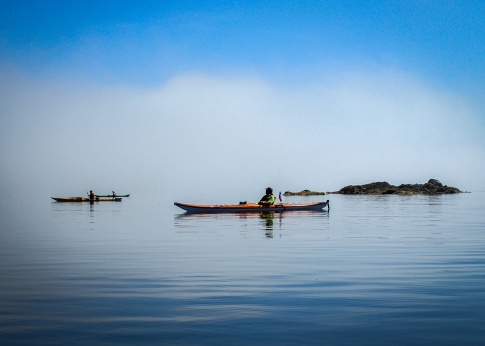 Qigong on the beach

After settling in on Gibraltar Island, Sven leads us in a kayak version of Qigong, an ancient martial art that integrates physical postures and breathing techniques. We meet two Beach Keepers, park wardens who patrol the Broken Group to welcome visitors and provide advice and safety information.

Tonight we choose a treed, secluded campsite. We fall asleep to the sound of crashing waves and wake up to the friendly buzz of hummingbirds.

Day three begins with a minus (extra-low) tide, so we float casually all morning, observing the low tide zone and photographing colourful sea stars, spiny sea urchins, and sea anemones, which look like plants but are actually animals that sting prey and pass food to their mouth with sticky tentacles.

The Tiny Group is a must-see cluster of tiny islets. Our lunch stop here boasts a 360-degree view and a sandy beach that could be in the Caribbean (except for the snow-capped peaks in the background).

Paddles up! We cross Peacock Channel to the Brabant Islands and on to our final camp in the grasses at a shallow, sandy bay on Hand Island. The apple trees and periwinkle, planted by homesteaders, are alien species, but they sure are pretty.

Out of the Park

On our final morning, we leave park boundary, but there are still 14 kilometres to go. The Pinkerton Islands are a sheltered and peaceful place to paddle before heading back towards civilization. At Stopper Island Shannon leads a yoga session, while Kevin and Ben prepare lunch, chasing boats when required as the tide rises.

Shannon takes the lead for the paddle to Secret Beach at Toquart Bay, and we arrive exactly on schedule for our 3:00 pm pick-up. Ted’s van and trailer shuttle us to Ucluelet, home of the lovely Wild Pacific Trail.

What a pleasure to meet young people who are passionate about their work, professional, and polite to us arthritic and opinionated old folks. Lead guide Ben keeps the trip safe and balances adventure with relaxation. Shannon teaches yoga and tells us about her travels. Kevin shares his knowledge of intertidal creatures and makes a great Asian Noodle Salad. You can learn more about this paddling team and their tours at Majestic Ocean Kayaking.

Strong winds and heavy rain can produce dangerous seas here on the wet, west coast, but aren’t we lucky people? With light winds and no rain, we are able to circumnavigate almost the entire Broken Group, a paddling distance of 61 kilometres – a diverse, entertaining, and unforgettable adventure.

This blog has been silent for the winter months, we dealt with some health glitches, but we are up and running now. 2016 was a big year (our 50th anniversary, Doug’s 75th birthday), but 2017 has its celebratory milestones, too: fifteen years of retirement, our oldest grandchild graduates from high school (congratulations, Nick!), our son celebrates his 50th birthday, and it is Canada’s sesquicentennial – 150 years since Confederation. The Dominion of Canada was born July 1, 1867, when the British North America Act melded Upper Canada, Lower Canada, Nova Scotia, and New Brunswick. (Canada as we know it, with ten provinces and three territories, is only turning eighteen, but that doesn’t have quite the same ring to it). We aim to hike, bike, or paddle in six of Canada’s provinces this year. Stay tuned!

This site uses Akismet to reduce spam. Learn how your comment data is processed.